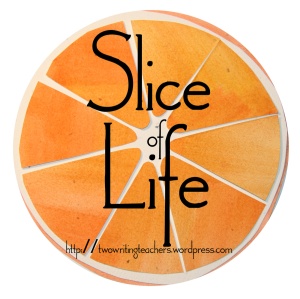 At Two Writing Teachers, the weekly Slice of Life drew me this week. I have not participated for some time. Since retiring last year, I have removed from the teaching community, but I have certainly missed it. I have also missed the community of writers and teachers involved in the Slice of Life.

I have been immersed in the Olympics over the past few days. I was worried before the games began, but I have seen so much skill and determination from all the athletes. It has even made me tweet more and gotten me addicted to twitter!

There have been so many wonderful stories and people showcased. Parents of athletes have been interviewed and their dedication to their children and their dreams has been amazing.

Canadian athletes have become much more determined in their desire to win gold and it is showing in their performances. The pride of Canadians in these athletes is tremendous.

Yet, truly, it is the stories that resonate:

The Dufour-Lapointe sisters who with their other sister dominated in ladies’ moguls and won gold and silver. Yet they are always there to support each other.

Alex Bilodeau, whose inspiration has always been his brother Frederic, won a second gold.

The Canadian ski coach who gave a ski to a Russian skier “to preserve his dignity”.

There are so many individual stories. These athletes are all inspiring and even in defeat, show much courage and pride.

No matter the end result, the Olympics has proven that the athletes are what is important. Congratulations to them all.

One thought on “Slice of Life Tuesday”