It’s time once again for Connect Five Friday, hosted at Book Date by Kathryn – the meme where we share five book/reading things that connect in some way.

It’s hard to believe that it will be 20 years for 9/11 tomorrow. Twenty years since so many lives were lost to terrorist attacks.

Most people remember where they were when the planes crashed into the Twin Towers.

I was teaching and did not hear anything until recess, when we were told to check the tv in the library. None of us could believe the news. Then parents started arriving to take their children out, as there was fear that Darlington Nuclear station might be bombed.

My daughter was in high school and had a spare first period so she an a few others were at a coffee shop. She saw the first pictures – the ones that were later omitted – of people jumping to their deaths.

There are many books that have tried to tell the story of that day and all the ramifications from it.

In Canada, the landing of so many planes in Gander led to an amazing musical – Come From Away – that highlighted the amazing compassion of the people of Gander.

Here are 5 fiction books written for young people, to help them understand the horrors of that day. (summaries from Goodreads)

The Memory of Things by Gae Polisner

“On the morning of September 11, 2001, sixteen-year-old Kyle Donohue watches the first Twin Tower come down from the window of Stuyvesant High School. Moments later, terrified and fleeing home to safety across the Brooklyn Bridge, he stumbles across a girl perched in the shadows, covered in ash, and wearing a pair of costume wings.”

“It’s September 11, 2001. Brandon, a 9-year-old boy, goes to work for the day with his dad . . . at the World Trade Center in New York City. When two planes hit the towers, Brandon and his father are trapped inside a fiery nightmare as terror and confusion swirl around them. Can they escape — and what will the world be like when they do?
In present-day Afghanistan, Reshmina is an 11-year-old girl who is used to growing up in the shadow of war, but she has dreams of peace and unity. When she ends up harboring a wounded young American soldier, she and her entire family are put in mortal danger. But Reshmina also learns something surprising about the roots of this endless war. “ 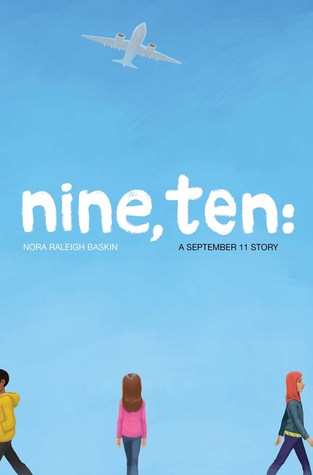 “Ask anyone: September 11, 2001, was serene and lovely, a perfect day — until a plane struck the World Trade Center.   But right now it is a few days earlier, and four kids in different parts of the country are going about their lives. Sergio, who lives in Brooklyn, is struggling to come to terms with the absentee father he hates and the grandmother he loves. Will’s father is gone, too, killed in a car accident that has left the family reeling. Nadira has never before felt uncomfortable about being Muslim, but at her new school she’s getting funny looks because of the head scarf she wears. Amy is starting a new school in a new city and missing her mom, who has to fly to New York on business.

These four don’t know one another, but their lives are about to intersect in ways they never could have imagined. Award-winning author Nora Raleigh Baskin weaves together their stories into an unforgettable novel about that seemingly perfect September day —the day our world changed forever. “

“Award-winning author Jewell Parker Rhodes tells a powerful story about young people who weren’t alive to witness this defining moment in history, but begin to realize how much it colors their every day.”

“This is a story about bullies and heroes. About tragedy and hope. About enemies with two legs and friends with four, and pesky little sisters and cranky old men, and an unexpected lesson in kindness delivered with a slice of pizza. This is “Eleven”: the journey of a boy turning eleven on 9/11. “

Check here for books about the history before, during and after 9/11.